After having received a last-minute text from my good friend Graham, letting me know that he was free for a game on Sunday, I wasted no time in finding a scenario for us to play Crossfire:WWII using my 1/600 scale miniatures.

As I mentioned in my previous post, the anniversary of the D-Day landings took place on Thursday, so I was keen to do a war game set in Normandy and hit the WWII folder (yes I am that organised!) with alacrity to find out more about the battles that took place in the Canadian sector of the Allied bridgehead around this time. As is so often the way, my browsing brought me to my copy of GHQ Micro Armour war game supplement ‘Canada in World War II’… 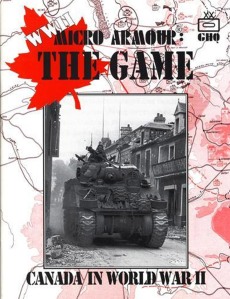 This excellent book has thirteen historical scenarios, following the campaigns and battles of the Canadian army during WWII, including Sicily, Italy and Northwest Europe and it was here that I found what I had been searching for…

At 21:00 on the night of 8th June, Standartenfuhrer Kurt Meyer, led a hastily assembled Kampfgruppe from elements of 12th SS Hitlerjugend division. With only two companies of Panther tanks and a single company of Panzer Grenadier infantry with minimal artillery support, he planned to attack the village of Bretteville-L’Orgueilleuse, which was held by elements of the Regina Rifle Regiment of the 7th Canadian Infantry Brigade.

They reached the Canadian firing line by 22:00 and pressed into the attack, taking heavy losses, but managing to break through the outer defences and after shelling the village several Panther tanks entered Bretteville, one even reaching the Regina’s command post before being knocked out by PIAT anti-tank gun fire. 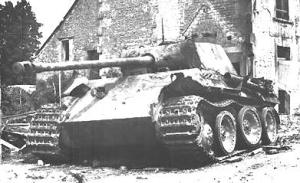 Deprived of sufficient infantry support the Panthers of Meyer’s force could not push the beleaguered Canadian’s from their positions and at dawn, on the 9th June, the attack was called-off.

For this game I decided to take control of the Kampfgruppe Meyer. I don’t often play the Germans due to my fondness for the Allied and Soviet forces, but a change is as good as a rest and I was interested to find out  a little more about this small, hastily formed force. Tanks without infantry support would more than likely become easy pickings for well-trained enemy infantry, when fighting in urban terrain, so this was going to be a tough nut to crack!

Graham set up his forces via Hidden Deployment and placed fortifications, including two sections of barbed-wire and hidden minefields. I deployed my forces on to the table and took the first initiative… 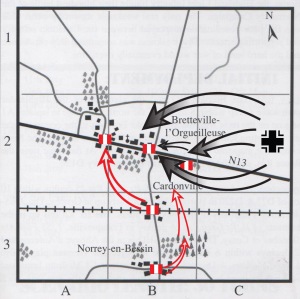 As the map above illustrates, my plan consisted of three groups, each a mixture of tanks and infantry. The southern-most group swung toward Bretteville from the south-east, clearing the forward elements of the Canadian defenders from the woods, east of the village on the main road (N13) and then pressed on to the objective. The northern group took a wide path to out-flank toward the western-most sector of Bretteville. Meyer led the central group holding back a reserve force and directing artillery.

After successive attacks from both arms of the pincer, taking heavy losses of both tanks and infantry in withering cross fires and gruelling close combat encounters, I finally managed to capture the eastern end of the village. Graham’s Canadians made several counter attacks which, fortunately for me,  I was able to repel and I pushed further west, clearing the village of defenders. The casualties on both sides had been very high and Graham was unable to muster a force able to ‘up-root’ me from the objective.

An interesting and enjoyable game was had by all and a ‘what if?’ situation has now taken my fancy! Meyer’s plan was to co-ordinate his attack with that of the 26th SS Panzer Grenadier Regiment to the west, at Putot-en-Bessin. If he had been successful in capturing Bretteville, the German regiments would have been able to link-up and cut the leading Canadian elements off and maybe even make subsequent attacks further north toward Juno beach?

Fortunately we will never know, it certainly is food for thought however and maybe even a follow-up scenario is to be devised…

Home of the Grumpy Gnome

Tinkering with Artwork and Ideas

A Warhammer 40k wargaming hobby blog of a Games Workshop fanboy. Painting to a table standard.

The life and loves of a plantsman

Crusader Publishing
The Goldfish of Justice
Gunsmoke and Knitting